'Are you on pilgrimage?' A friend asks.
That has not been the intention.

But here in Avila, it is hard to escape the tracks of Saint Teresa, prominent Spanish mystic of the Middle Ages.  I’ve seen her right hand ring finger, preserved in a jar.  I’ve eaten a yema de Santa Teresa, yema meaning, ‘yolk’, ‘fingertip’ – or more prosaically, ‘confection made from egg yolk and sugar’.  And I’ve plonked myself down beside her brand new statue, sculpted by Óscar Alvariño, just outside the convent carrying her name and built on the spot where she was born in 1515.

Unveiled on the day before I arrived, the bronze Teresa sits alone on a stone bench – or rather she would be alone were it not for the constant stream of paparazzi and selfie-seekers determined to get snapped with her.  They come as individuals, couples, groups:  an immaculately coiffed old woman kissing her on the cheek.  Three generations of the same family celebrating a golden wedding  and setting up a team photo with Teresa as mascot in the centre.  A chubby boy running his toy plastic sword across her throat.  No mates a la santa!  Don’t kill the saint! exclaims his father, bedecked with three crucifixes.

About 20% bigger than life size, the sculpture holds a quill in her right hand and a notebook on her lap, symbolising  instructive works that she penned, including El Castillo Interior (The Interior Castle), El Camino de Perfección (The Way of Perfection), and her autobiography (Life of Teresa of Jesus).  She wrote often frenetically, as if taking divine dictation in a bold and flowing script that, for the most part, eschewed punctuation.

Entering the Carmelite order at a young age, Teresa grew unhappy with the laxity around her and became the instigator of more severe rules - of silence, continual prayer safeguarded by strict enclosure and solitude, manual labour, perpetual abstinence, fasting, fraternal charity, the renunciation of property, and even the practice of self-flagellation (the coiled rope she used, her disciplina, is on display beside the ring finger).  These reforms eventually led to the creation of the Discalced Carmelites, discalced coming from the Latin meaning ‘shoeless’.  (The usual translation, ‘barefoot nuns’, is perhaps a misnomer, given that the order wore sandals.)

Often running against the establishment, she tirelessly travelled by mule or oxen to other parts of the country to found and visit some 17 new convents and 15 new monasteries of the men’s order, until illness intervened and she passed away at the age of 67.  But that was by no means the end of her influence, fame or intrigue.  Curious events happened after she died in October 1582.  ‘From the grave of Teresa of Jesus wafted a scent so delicious that the Carmelites desired again to see the body of their mother,’ wrote Sister Ana de San Bartolomé, who had been her close companion and nurse during her final sickness.  Accordingly, some nine months after her death, her coffin was opened and, as is reported in a contemporary account from Jesuit priest Francisco de Ribero, although her nun’s habits had certainly rotted, her body ‘was as healthy and whole as if she had been buried the night before’.  Such bucking of the normal trend towards decomposition is known as ‘incorruptibility’ and in Catholicism is believed to be a sign of holiness.  But rather than being marvelled at, this body, so eerily intact, was subjected to a ghoulish dismemberment, inaugurated by her erstwhile friend and spiritual director, father Jerónimo Gracián, who was the first to step forward and cut off one of her hands.

Body parts, then delivered and traded, found their way to disparate locations.  As well as the aforementioned finger in Avila, her right foot and portion of upper jaw are in Rome, her left hand in Lisbon, her right hand, left eye, fingers and scraps of flesh all over Spain, and her right arm and heart in Alba de Tormes, site of another important Teresian shrine.

Though these are part of the visual inheritance of Saint Teresa, another highly significant legacy is the account of her transverberación, English translation…..... ‘transverberation’.   Even the religiously educated Spanish teacher with whom I’ve had a couple of lessons does not know the meaning of this word, which describes the moment, as Teresa asserts, when an angel pierced her heart with a dart: ‘I saw in his hands a large golden dart and at the end of the iron tip there appeared to be a little fire.  It seemed to me this angel plunged the dart several times into my heart and that it reached deep within me.  When he drew it out I thought he was carrying off with him the deepest part of me, and he left me on fire with great love of God.’  Teresa’s mystical experience – one of many claimed by the saint -  has been explained away by some as psychological disturbance and by others as bearing more than passing resemblance to sexual orgasm.  What is clear is that Teresa believed herself to have been potently and definitively transverbed.   Her mystic union with God has been much celebrated in art, notably in works such as Bernini’s sculpture in the Church of Santa Maria della Vottoria, Rome.


My curiosity thoroughly aroused, I decided to attend an event at the Convento de la Encarnación. Pushing past a group of teenagers who lunged and sliced the air with their hands in an impromptu self-defence lesson being given by a vigorous young priest with dog collar relaxed to one side, I entered the church.  ‘Are you here for a tourist visit?’ asked a volunteer, ready to usher me instantly back outside.  I stammered that I was here for the evento especial.  Ah, she said.  La misa.  The mass.

Sound of Ulster protestant forebears twirling in their graves.


And mass it was, with eight priests officiating and a long sermon in which transverberación was mentioned multiple times, this being its anniversary, but many words lost to me through the quickness of the Spanish and the reverberación of the PA system.  As the congregation filed to the front to take communion, I stayed put and swivelled round in my seat to stare at the back of the church.  What had seemed large rectangles of black on the back wall were in fact upper and lower level grilles through which ghostly entities could now be seen.  Two priests stood by a barred window that had opened.   From the darkness behind, nuns’ faces appeared, one by one, some thirty of them, each framed for a moment, each a portrait in the perfect head-and-shoulders sized space, their mouths opening, their tongues pushed forward to receive the host.

As they disappeared back into the gloom, I peered as hard as I could at the floor above but only caught sight of the occasional billowing of robes in unexpected draughts of air.  The sisters had shrunk back into seclusion and anonymity.  Yet they are not the only ones of their kind in this city. Today, August 29th, I’ve come to the Convento de San José, first convent of Discalced Carmelites that Teresa founded in Avila.  Inside the small museum, despite my pleading, I’m not permitted to use my camera, even without flash, and thus am annotating in a notebook the sacred sundries displayed behind glass, while two receptionists carry on with their knitting.  A group of eight people hovering nearby have expressed the wish to go across the courtyard and round the corner to the church.  Both women lay down their wool projects and together get up to act as escort, shutting the door firmly behind them.

And suddenly, for a long five minutes, I am entirely alone -  the sole custodian of Saint Teresa’s relics.

Instead, virtuously, I carry on writing:

After the women return it is my turn to enter the church.  It is just past 1 pm and bells have been ringing deep within the confines of the convent.  Left again on my own, I sit down in a pew and stare at the substantial spatter of gold across the chancel.  And then, a quiet but unmistakeable rustling starts behind grilles over to the front and left.  They have come, those elusive Carmelite nuns, just to the other side of the wall, and I hear the sound of prayers and responses from voices sweet, sure, close but invisible, separate and disembodied.  I am spellbound and cannot move as the space fills with holy words.

Who are these women?  Why are they here?  What is it like to be locked away from the world?  Eventually I tear myself away from such thoughts, aware that the time for public visits has passed.  Yet as I exit the front door, I find that the heavy iron gates just beyond the entrance steps have been closed and bolted.

There is a moment of intense panic, for no one is in sight.  I fiddle and work at the huge iron bar that will not budge, smearing my hands with grease that has gone sticky from the heat.  But at last, with one almighty heave, the great bolt moves.  The female voices in the church fade as the gates finally swing open, letting me slip out into the sunlight of the afternoon. 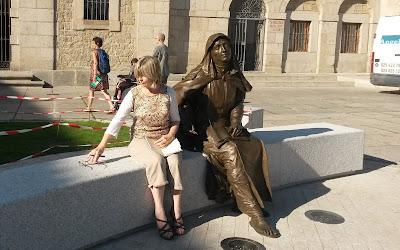