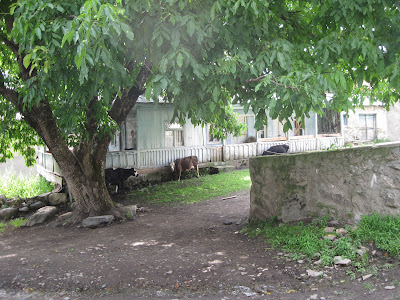 Songs to sing through the weathers, the harvests, the feastdays.  Through joys and sorrows, through births and burials.  Songs to sing to fretful children.  Songs that show you sympathise with your tired oxen.

It was because I wanted to learn such songs that I found myself this time last year in the Svaneti region in the far north of the republic of Georgia in a village within sight of the imposing two-horned Mount Ushba.

Criss-crossed by footpaths shared by inhabitants and docile livestock, the village – Lakhushdi – was a small collection of houses that were simply furnished but often large and spacious.  Many had wooden balconies that opened out to a breathtaking view of fields and mountains.

We were a group of twenty-five billetted in the homes of five different families who had never before welcomed a group such as ours.  In our honour, they had hastened to install indoor showers and plumbing, although we had been prepared to accept conditions as they were.  Irene from Edinburgh and I shared an enormous room with wood panelling (that I almost set fire to when I was inattentive to the electric wiring) in the Chamgeliani household, which served as headquarters for our visit.

Each morning we sat at breakfast tables spread with mouth-watering home-made produce: yogurt, butter and cheese not long from the cow.  Bread fresh from the wood stove.  Jam from cherries or plums picked from the trees.  Honey from bees that had gorged on wild flowers just down the road.  Newly laid eggs.  Red fruit compotes, plates of tomatoes, cucumbers and watermelon.  Moist nutty cake.  Tangy cherry juice.  And even chacha, the local vodka, that woke up voice and soul.

Each evening, we convened for a supra, a special feast in which traditional Georgian toasts are proposed to guests.  Time and again, Murtaz Chamgeliani stood and raised his glass to us, to our countries, our families, our ancestors - each toast deepening in its embrace so that in the end I truly believed my heart could be spirited out of its ribcage never to return home.


One of the main reasons for our visit was to learn songs and round dances so that we could take part in the Feast of Limkheri on top of the nearby Tinghali Hill.  Our three teachers - Murad, Gigo and Givi - their faces ruddy from mountain air, their throat muscles prominent and strong, took us phrase by phrase through the songs written phonetically on our songsheets.  They painstakingly separated out vocal parts that they had always known only as an organic blend of sound, and sang with subtle shifts in tone counter-intuitive to the western ear.  Sometimes we were accompanied by traditional instruments, the carved-wood djangi, or the chuniri played by Ana Chamgeliani as she taught us cradle songs.  It required intense concentration and in this we were aided by the gifted singer Nana Mzhavanadze, who acted as a kind of musical bridge.


But it wasn’t all about the singing. There was also time to stroll down to the river to pan for gold, to walk with Madona at sunrise in a meadow dotted with blue, pink and yellow bloom.  To learn from Mzia how to bake tch’vistari bread sandwiched between walnut leaves.  To teach She’ll Be Coming Round the Mountain to little Demetre and his brother Erekle, who both preferred a lusty ay yay yoopee to the standard ay yay yippee.  What did it matter at those moments when our translator, Irina, wasn’t at hand and we faltered in our attempts to tell a joke or ask a question in Georgian, or to explain to a village elder the purpose of the International Date Line drawn on the inflatable globe she was holding?   The affection and acceptance shown to us was transcending.


Emboldened by our efforts at the Feast of Limkheri, we seized the opportunity to travel deeper into the to celebrate the festival of Kvirikoba.  In unforgiving heat, we climbed a hill to the stone shrine where pencil-thin candles dribbled down the walls.  There, at the summit, we joined hands with each other and with strangers, sang and danced with gusto, me holding on firmly to our teacher Murad as much for his pitching as for his assured steps.

As we sat down on the grass, hot, tired but pleased with our efforts, a man approached Kaxa Chamgeliani, who for that day was co-driver on our minibus.  “I didn’t realise that the people with you were foreigners,” he said.  “At first I thought that they were all from Lakhushdi.”

As I write this post, another group - some returners from last year - are nearing the end of their stay at the very same village, on a holiday organised by the indefatigable Madge Bray.  You can check out what it's all about here: Braveheart Georgia


This is a film about last year's Feast of Limkheri made by Mike Spring: 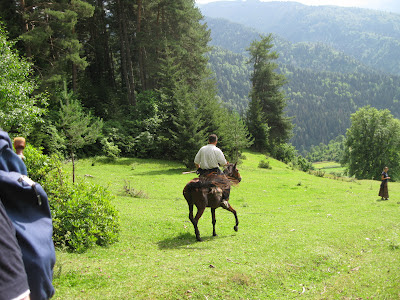 Get Your Fingers Round This 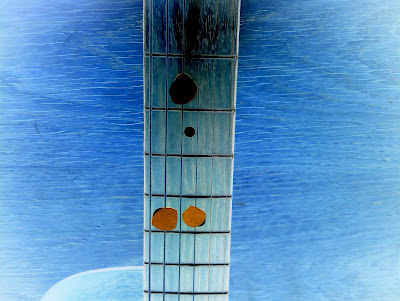 Have been trying to get to grips with a guitar chord.  It’s pictured above, symbolised by the three big dots, and features in a song by KT Tunstall called Heal Over.

Now, it may look easy.  But having recently been afflicted in my left hand with something I’ve decided to call Sheepshearer’s Fingers, I can tell you it’s quite a stretch.

Well, the jury appears to be out.  In checking that font of knowledge, You Tube, one guitar teacher states that this is a C add 2 chord.  Another says it’s an E diminished.

So what’s a confused girl to do other than go to theguitarbuzz.com.  There you can plop your notes down on the diagram of strings and it will tell you, visually and aurally, what chord you are playing.  Result.  It’s an E add 9 . 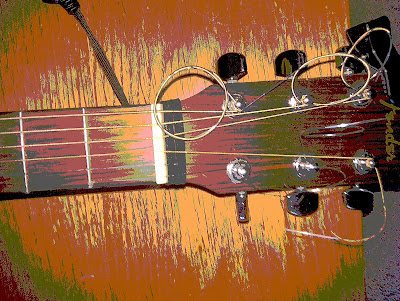 So far so intriguing with the first chord of the song.  There’s further disagreement on You Tube over the third chord.  One expert claims that it is a simple B.   It’s not a simple B in the original version! I want to shout.  There’s something else going on!

In fact, the theme there’s something else going on has all too frequently raised its ugly head.  I used to own a book of Beatles songs that were spookily easy - because they were just a tad wrong.  Most of the chords had been simplified to plain C, or common-or-garden G: the musical equivalent of being forbidden from using anything in your palette other than primary colours.  Which can certainly be exciting territory, until the illicit discovery of flatted fifths, augmented 6ths and add 9s.   These are the stray notes, the guesting notes, the tone-mixing notes.  The notes  that have driven up in a limo, elbowed their way through security, helped themselves liberally to nibbles and sour cream dips, and now are stubbing out their cigarettes on the carpet.

The notes that have come with the express purpose of slapping that plain old chord around. 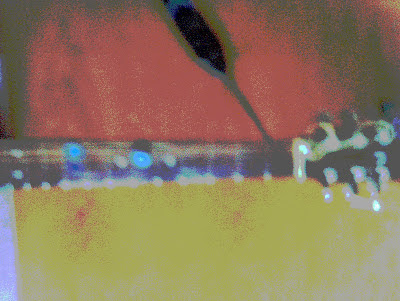 Posted by Katie Griffiths at 21:50 No comments: