How Did That Get There?

Today I happened to be looking down the list of Word documents on my computer, and I came across this title:

How Successfully Did Pitt Face the Challenge of the French Revolution from 1789-1801?

There it was, sandwiched between Hits of the 60s. doc and How to Read an Unseen Poem and Compare it to One in Your Booklet. doc – both unmistakeably work  of my own hand.

Now, I haven’t written a history essay for (loud cough)-ty years or so.   So exactly how Mr Pitt got in amongst my personal effects is unclear.

I feel it important to point out to my future executors, should I ever go under a bus and should they ever need to comb nostagically through my written remnants, that this blip of erudition has not been penned by me.  Never in my life have I ever considered the agonisings of the British Prime Minister at the turn of the 18th century as he stared, possibly bleakly, into the shockwaves of the French Revolution.

But looking at that Pitt document, standing as a proud bastion of oddity among all the other titles, gave me the same feeling I had back in June when I was examining my daughter’s cycle route through the Pyrenees.  According to the map, near the French town of Bourg-Madame  her route took her past  Spain on one side - yes there was the border clearly marked,  and………..Spain on the other.  I blinked.  I looked again.  How on earth could that be?


It turns out that there is a little corner of that is forever .  Llívia, some 12.84 square kilometres with a population of 1,665 (data from 2011), is a tiny island of smack bang in French territory.   Connected to its mother country across some two kilometres of road, the D68, Llívia is part of the area known as Cerdanya (Cerdagne in ).  In 1659 the Treaty of the Pyrenees established the borders between and .  Some 33 villages of Cerdanya had to be given up to , but the town of managed to escape by dint of a loophole – the treaty stipulated that only villages were to be ceded to the northern neighbour.

And so, as it is completely surrounded by , Llívia is technically an enclave within , or an exclave of .

Just as the Mr Pitt essay could be considered an enclave within my computer documents, but an exclave of what may be a copious output of essays gone astray from an A-level syllabus, possibly my son’s, possibly a scribing elf’s.  It will be there forever unless I exert jurisdiction over it, and delete it from my files.

Which I choose not to do, because I like its quirky presence.

So how did Pitt face that pesky challenge of the French Revolution?  Well, the conclusion of the exclave essay tells me that  “it is possible to argue that Pitt overreacted somewhat”.

Posted by Katie Griffiths at 22:19 No comments:

Email ThisBlogThis!Share to TwitterShare to FacebookShare to Pinterest
Labels: home is where..., movement 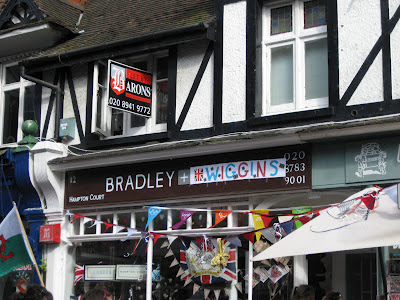 Last Wednesday afternoon, I stood with my humble bicycle at at the finishing line for the men cyclists’ Olympic Time Trial, and could not help but think of American President John Kennedy’s words when he addressed the citizens of  in 1963. His purpose was to show solidarity, to indicate that he understood the current circumstances in that city by asserting that he too was a Berliner.

And as flags waved, cheers arose and the crowd at went bananas when the sideburned hero, British cyclist Bradley Wiggins, came in first place to receive the gold medal, I also wanted to express fellowship in the moment.  I wanted to state that I too was part of a fraternity, the two-wheeled one surrounding me, with a vehement: ich bin ein Radfahrer.

But in the absence of anything resembling the megaphone required for such a declaration, I headed instead for a celebratory cappuccino at a café facing the gift shop Bradley + Brown  which, for the occasion, had changed its name to Bradley + Wiggins.

“What a great result for Wiggo,” said one of a group of three cyclists who joined my table.  Of course, we agreed, things hadn’t quite gone Wiggo’s way – nor for Mark Cavendish, nor any of the British team - in the previous Saturday’s road race.  We scratched our heads in bewilderment at how our sporting greats had on that day seemingly fallen foul of two cycling truths: one, that a peloton is a cosy and sociable hangout, but a place to pedal hell-for-leather out of if you want to make your mark.  And, two, that not only should you sweet-talk your own team-mates in order to decide which of you has the best chance of victory, but you also have to get to work in the locker-room beforehand, distributing devastatingly yummy gels and energy bars to your competitors.  Only then might any of them be persuaded to take the strain in turn, by cycling at the head so that you can, for a while, tuck comfortably into their slipstream. The Brits last Saturday had got themselves snagged at the front of the peloton, a mistake avoided by the women the next day when Lizzie Armitstead romped home to a silver. 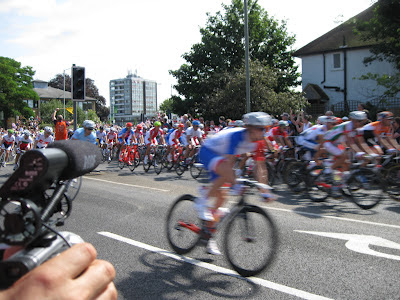 Even before my tablemates had sat down with me to share such insider information, I could tell they were serious cyclists – not just because of the hungry and over-exercised look, not just because of the body-clenching clobber they were wearing, but because they knew these routes like the back of their hand.  This was their patch, they said, here, round , and out to the Surrey Hills - an Area of Oustanding Natural Beauty (note the capital letters), which always comes as a surprise to any visitor who thinks that sprawls unchecked until it hits the .  But an Area, apparently, with more than its allocated share of bicycle-chewing motorists who are inclined to stick heads out of windows of four-by-fours and shout: “So who pays road tax, then?” 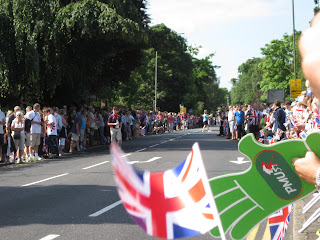 It’s not the kind of reception that the current crop of international competitors had been receiving.  As they flew past, all cyclists were loudly cheered.  Indeed, anything on wheels was cheered.  Support vehicles.  Cameramen on motorbikes.  White vans containing members of the press.  Policemen on motorbikes who did high fives with spectators or posed with hands on hips to whip up the throng.

And even me, on my way back along the path from .

Riding into the teeth of the same warm wind that had kept blowing the uneaten half of my blueberry muffin on to the ground back at the café, I wove through prams, children on scooters, entire shoals of cycling families.  Ich bin ein Radfahrer I kept reminding myself.  Suddenly, up ahead, two young energetic cyclists were in my sights.  “Go on!” cried a smiling woman who stepped back into the bushes as I passed her.  “You can beat them!”
Posted by Katie Griffiths at 19:57 No comments: