Deliver Me From The News 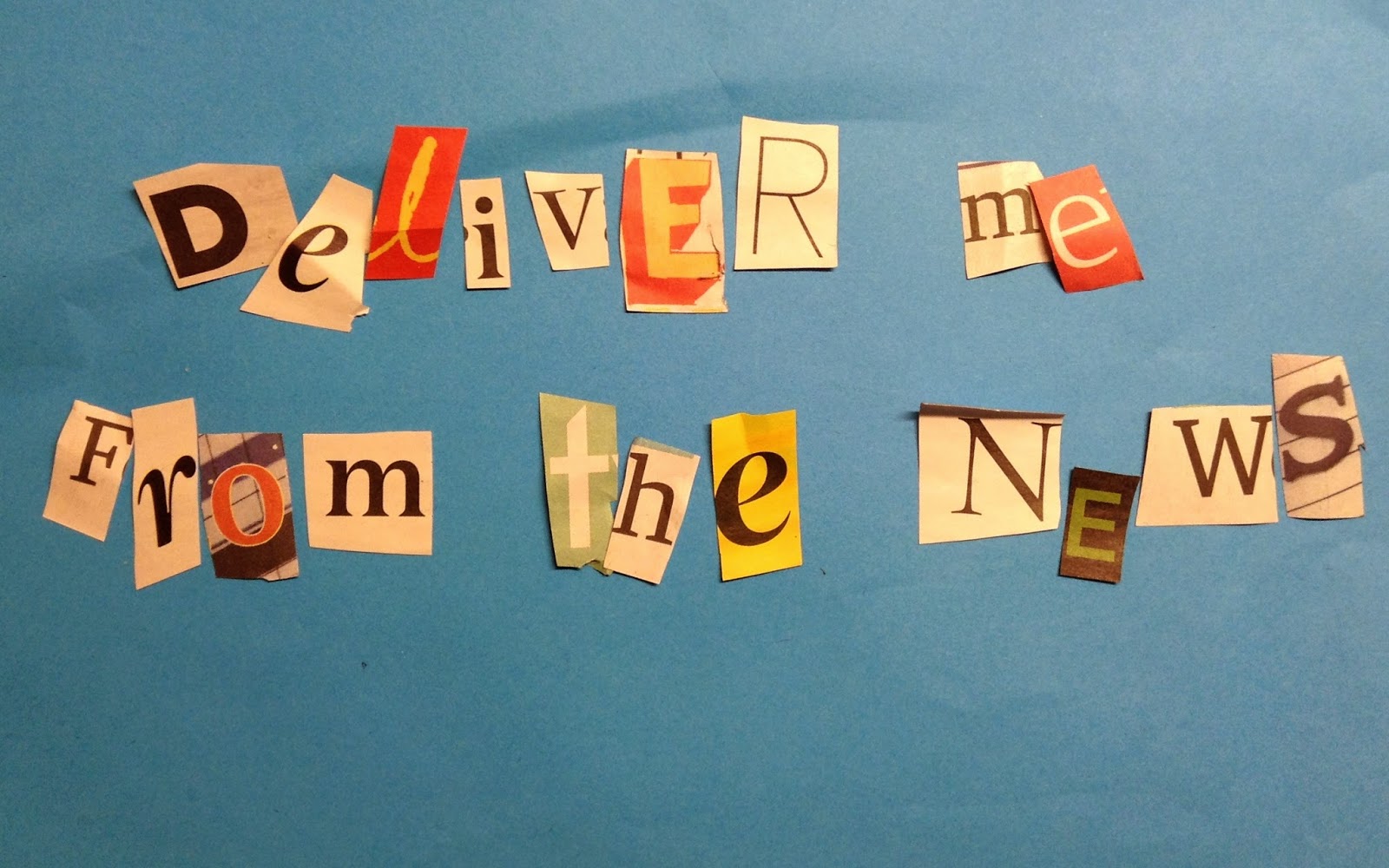 Thus said an acquaintance a few years ago, who had foresworn watching or listening to the news in favour of a more tranquil life.  To be, shall we say, so deliberately under-informed seemed an alien concept, but his words set me on an examination of my own relationship with the news.

And it was a needy one: waking up to BBC Radio 4’s Today programme, followed by dips in and out of news media on the internet, rounded off by early evening news and, even later, by News at Ten.  I couldn’t leave news alone, but neither would it take its hooks out of me.  I began to be affected by the ‘barrage of bleakness’ as Charlie Beckett put it in a recent Radio 4 programme entitled Good News is No News.   It was not merely my feeling of impotence in the face of stories of violence and cruelty, of political crassness, of greed and manipulation, or of pending environmental catastrophe which rankled, but an extreme annoyance at the manner of delivery – combative interviews, unremitting speculation, a negative agenda and doomsday scenarios.

A year or so ago, I switched allegiance in the mornings to Spanish radio on RTVE.  Quite apart from the fact that I could only understand half of its foreign sounds, which gave the impression of waking up in a tiled hostal and only a stroll away from the beach, the necessary preoccupation with all issues Spanish that did not impinge upon me gave a welcome distancing.  With less hand-wringing, I could simply listen to how interviewees were, for example, given much greater rein to answer questions without constant interruption.  Or how excitement would mount audibly when days like Los Reyes approached.  Or how gems and curiosities that made few waves here in the UK would surface, such as the story about El Pequeño Nicolás, a twenty-year-old who hoaxed his way into the highest circles, even getting in under the radar, at a reception of dignitaries, to shake the hand of the new king Felipe on the day he assumed the throne.

Lately, however, I have forsaken even Spanish radio at sun-up, preferring a gentler entrance into the day with Solfeggio chants and a few yoga stretches.  News, I contend, especially first thing in the morning or last thing at night, can be extremely bad for you.   At a time when the ‘human race has never been healthier, wealthier or more peaceful’ (as Charlie Beckett put it in the programme Good News Is No News) notwithstanding that blood-curdling acts do happen, we are perhaps being given a distorted view.  Doom and gloom are a daily diet.

Twenty-two years ago, the newscaster Martyn Lewis was apparently pilloried when he attempted to argue that ‘normal journalistic judgments should be applied to all stories instead of pushing positive stories automatically on to the spike.’  Warned not to challenge the status quo, with his job put on the line, he got nowhere in his efforts to start a discussion about ‘holding up a proper and sensible mirror to society’.

That the news is essentially negative was underscored by Tony Gallagher, deputy editor of the Daily Mail.  ‘The reality is that it’s a gloomy world out there and bad things happen.  And we tend to be a conduit for bad things.’  When asked by Charlie Beckett whether this was not giving an Old Testament view of a world full of plagues and disasters, he answered: ‘ It’s a tiny fragment of the real world, and it’s an extraordinary fragment of the real world, which is why we should be covering it in the depth that we are.  Of course it doesn’t relate to the ordinary person’s existence any more than a crime thriller relates to the ordinary existence of somebody living in suburbia.  But we are competing for people’s time and their attention, and the reality is that bad news does sell.’

Recently, in what could be seen as a proliferation of shocking news, media organisations have begun to apply correctives, ‘solutions-based journalism’, like ‘The Optimist’ in The Washington Post and ‘The Fix’ in The New York Times.  Huffington Post’s ‘What’s Working’ section is doing well.  ‘Stories that reinforce our faith in human nature are shared three times more than the combined average of all our other sections’ share rate,’ said Ariana Huffington, co-founder and editor-in-chief.  Jim Waterson, political editor of Buzzfeed, echoed this.  ‘Stories that are shared the most do tend to be positive – there’s something about your identity, there’s something you’re proud to support or something that you want to get involved in.  But,’ he added, significantly, ‘when there is massive news, then that overrules everything.’

If I am cautious in my own consumption of news, and seek to turn down the volume of negative in favour of more pleasing stories, does this make me ignorant?  Am I sticking my head in the sand or recognising the limits of a personal sphere of influence?  If I sometimes turn a deaf ear to the bickerings of politics, am I rejecting civic duty or aspiring to achieve what a Buddhist might describe as non-complaining mind?  If I try to appreciate what is actually going right in society (if it ain’t broke, don’t fix it) am I merely Pollyanna?

Since the time of Martyn Lewis’s stance, our way of consuming news has been overturned.  It has now become our own responsibility to control and ration what we see or hear.  No longer does one, or even a set of, authoritative broadcasters hold the key to editorial control.  We can obtain news from hundreds of different news organisations and social networks.  We can watch - at times grotesque - amateur footage, as well as professional coverage of events as they unfold.  We can binge on whatever news is out there to the point of sickness or, by finding the more wholesome, seek balance.

Or we can take the occasional break, and dare to switch off the news altogether.

Posted by Katie Griffiths at 17:41 No comments:

When the Horse Knows Best

It was late September in the Lecrin Valley, near Granada.  I had signed up to go for a horse ride – by 'ride', of course I meant ‘sit', for I had never had riding lessons despite having been conveyed by pony from A to B with minimum disruption on holiday trundles.  Picture a beach, with a bored quadroped being led by a string.  That is the level of my horsemanship.

My details had been handed in to the riding school: 1. no, not experienced 2. have only gone at walking pace - trotted (accidentally) once.  Meeting my steed, I was pleased that it had neither satanic stare, nor  dimensions of a battle-Percheron, astride which a body would rip in half.  In reality, this was a tiddler, and I was truly thankful.  It bode well for the one-hour session.

Again I emphasised to the owner:  no he galopeado.  No soy experta.  By which I hoped to imply that I had never galloped and was not an expert.

We set off in a small band - our leader Rodrigo, inveterate Canadian outdoorswoman Jean, and Englishman Robert who had trekked the length and breadth of South America on horseback.

‘Have you taken your painkillers?’ asked Jean.

‘Yes.  This is going to hurt like hell.  I’ve already taken two Ibuprofen.  At the very least, make sure you take some tonight and tomorrow.  You’ll really be aching after this two-hour ride.’

And so we set off, through the village streets, towards the side of the valley, and before long, were winding up a steep twisting path.  The horses' hooves slid in the narrow path's dust, inches from the sheer drop beside us.  My palms went clammy.  Vertigo came in hot waves.

Small consolation.  At each hairpin bend, there was no telling whether my animal might be seized with a lemming wish, or simply miscalculate and stumble, or whether I, in averting my gaze from the chasm, might lean the wrong way as my pony hopped up, yes, hopped up over rocks.

This was not the time to adhere to the Spanish style of riding, in which you hold the reins in one hand only.  Yet, during the midst of the perspiration and dread came a moment of utter clarity.  Here, between heaven and the boulders far below, it was no good panicking, or wishing I hadn’t come.  There was no way out, but forward.  I had no choice but stay on that horse’s back and have faith in its ability to get on with the business of climbing.

As we reached the top I breathed a sigh of relief to see the path opening out on to a flat plain  overlooking the town of Albuñuelas.  Things would get easier.  My beast, on the other hand, was of a different mindset.  Seeing the others racing ahead, and paying no attention to my hauling back on the reins, it sprang to action - first breaking into a trot then, Dios mio, a brisk gallop.

I bounced up in the air and slapped down as if on a bucking bronco.  If there was a preferred method of timing my landing on the horse's spine, which minimised the chances of falling off, I had little opportunity to finesse it.

Jean and Robert rode hard to catch Rodrigo.  'She’s never galloped before,' they said.  He glanced back at the spectacle of me see-sawing on the horse’s back.  'Sure she has.  She’s fine,' he replied.

Hang on, I told myself through clenched teeth.  Trust.  Trust the horse.  And gradually, over the length of the route, I began to learn to do just that.  To tune into to its rhythm.  To be firm, but not to fight.  I also constantly checked in with my own muscles – tensing this one, flexing that one, slightly twisting my body one way then the other to take tension off my back.  By the time we had ridden across the entire ridge, through olive groves, down through the village of Saleres and along the riverbed, I was non-plussed when, without warning, my horse staggered on a rock.

After a total of two and a half hours I finally dismounted, cocky to be still in one piece.  Oddly, though I took no painkillers at all, nor the next day, there was not one twinge in my body.

Would I do this again?  I’m not sure.  For a novice it was risky.

But it left me with an exhilaration - and a keener sense about surrender and letting go, about trying to get into harmony with an animal, with a moment, with an experience.  Magical.

Posted by Katie Griffiths at 17:12 No comments: