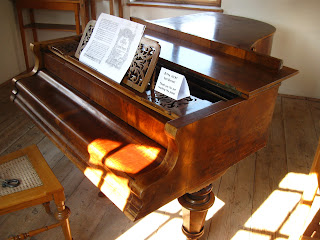 I was going to spend today at the piano.  Not the piano pictured above, which was Gustav Mahler’s and, besides, it’s in Austria and as the sign says, you’re not allowed to put your grubby hands on it in the first place.

But I got sidetracked by thoughts of that forbidden piano, and more precisely where it is located – in a little hut on the edge of a lake not far from , the Attersee.  For Mahler had the sense to seek peace and quiet for his musical scribblings and had the  luxury of using during his lifetime, not one, not two, but three huts, or Komponierhäuschen as we perhaps should call them.  How wonderful to have a retreat to mess around in, to make noise to your heart’s content, not in some airless nuclear bunker but in what is effectively a garden shed whose windows look towards an impossibly blue lake and mountains beyond.  And disturbing no one but the cows, the wind, the flies… 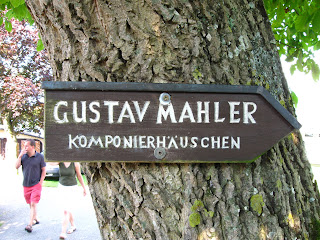 So then I started thinking about my own composing hut, more precisely composing nook in the dining room, where it is a scary prospect (not just for me) to let loose, caterwaul, experiment, bang out endless chords, all for the sake of writing some new songs.  It is hard to keep such work under wraps.  Today I had the house to myself, free from trapped listeners who could have easily got distressed.  I thought I would rumble up and down the ivories, stand on the loud pedal, gargle, open my throat, see what happened…

But then I got sidetracked again, because I couldn’t resist the attractions of my new toy, a Boss-BR 800 digital recorder.  And giving the piano the cold shoulder, I turned to a different instrument and plugged it in to the Boss.  Dear reader, I am excited to admit that for the first time in my life, today I made my acoustic guitar sound like a bass guitar.  Just by twiddling some knobs on a machine.  Yes, I know, this is old hat to all you techno-geeks.  But for me to hold and feel strings resonating and sounding,  in my headphones, as a bass guitar does –  I tell you, I wanted to elbow Jim off the bass at tonight’s band rehearsal.  I wanted to slap.  Pop.  Even go fretless.

Mahler’s Komponierhaus  in Steinbach on the Attersee is located in a campsite in the grounds of the Hotel Föttinger.  You can ask for a key and go and have a look.  He wrote part of his second and all of his third symphony there.  The other two huts are in Maernigg in southern , and Dobbiaco on the Italian-Austrian border.

Posted by Katie Griffiths at 19:35 No comments:

Email ThisBlogThis!Share to TwitterShare to FacebookShare to Pinterest
Labels: home is where..., music making

Learning While You Sleep

In my childhood, each night before a school test, it was my habit to smuggle the relevant textbook to bed and place it under my pillow, believing I could absorb the information by a kind of osmosis.  Because I tended to receive OK results, the strategy appeared to work.

Wind forward a few years to university and a degree based not on continuous assessment, but totally on final exams.  How could anyone in their right mind not stuff English-French dictionaries, English-German dictionaries, texts on Baudelaire, Racine, Kleist, and Goethe under the pillows?  During that fraught exam week, my books were piled high on the bedclothes then coralled under the meagre bolster.  Talk about a crick in the neck - it was like permitting your body to go to sleep in the basement while subjecting your head to a pummelling on the ground floor.

But my learning methods have moved on, thanks to an interesting discovery made when I began to use a radio alarm and John Humphreys on Radio 4’s Today programme to wake me up in the morning. What tended to happen was that, rather than springing up out of bed, I would doze off again with the programme still on in the background, and experience dreams that were frequently interwoven and embroidered with snippets of news.  I know this because I've checked on Radio 4 Listen Again and found how entire dreams have been constructed from a sparky interview with David Cameron or turgid item on Eurozone debt restructuring.  Clearly I've been listening, though seemingly asleep.

Could this also be applied to language learning?  For study purposes, I've defected to ’s Radio Nacional for my wake-up call, in the full knowledge that listening to a foreign language that you haven’t fully mastered can be dispiriting.  You think you are making strides.  You embrace the radio.  And there be gibberish.

And yet, nowadays when I wake, then doze off, to the dulcet tones of Juan Ramón Lucas, lots of Spanish invades my dreams.  A couple of weeks ago, I dreamt I was holed up in a pub while at the far end of the bar my normally monolingual partner gave full vent – in Spanish.  In fact, his Spanish was so brilliant (gosh, I said to the wine-sipping friends beside me) that in the dream, I got out a recording device just to prove it to the folks back home.

But, this is the potentially interesting part: he happened to be talking at length about crime, and even demonstrated robbers’ disguises by pulling a stocking mask over his face.  Was this being discussed on the radio at that very moment?  Did my snoozing brain actually understand more than my awake brain would have?

On the one hand, the ability to listen has, of course, everything to do with concentration.  We tune out when something bores us, tune in when we’re interested.  To learn to catch every tenth, then every fifth, then every second word in a foreign language requires extraordinary effort.

On the other hand, the dozing or semi-dozing state – territory of hypnotherapists in accessing memories or releasing conversation – may be free of the stress that curtails concentration, allowing the brain to take in more.

Have I checked that Radio Nacional España was talking about crime on that occasion, I hear you cry.  Well, having only just today discovered its listen-again facility, I have yet to wade through the numerous news items and pinpoint the suspect, so to speak.

But it is an ongoing experiment.  Stay tuned…

Email ThisBlogThis!Share to TwitterShare to FacebookShare to Pinterest
Labels: home is where..., language

These choices, especially if you are serious about smearing colour enhancement on your mouth, are all based on one over-riding assumption – that they need to be reddish, or pinkish, allowing for the occasional foray into the orangeish or even brownish edge of the spectrum.

Our capacity to see and enjoy shades and tinges is essential to adornment and has become, in the last century, a marketing dream.  But more important of all, perhaps, is the vibrancy we see occurring naturally – in the crimson fire of sunset or the dazzle of an azure sea.

Which brings me to the Greeks.  Or, more precisely, to Homer.

For it would seem that the great poet of the Iliad and the Odyssey, writing over two and half thousand years ago, interpreted colours differently to the way we interpret colours.  And we know this through his use of language.

In the fascinating Through the Language Glass, author Guy Deutscher tells us that it was actually William Gladstone, best known for being British prime minister in the 1800s but equally at home writing scholarly tomes, who made the initial observation that Homer’s use of colour adjectives was bizarre:  describing the sea – and sheep - as wine-coloured, honey as green, and faces going green with fear. This seemed to suggest a totally other – or perhaps even less evolved  - way of seeing colour.

Was this some kind of colour-blindness, and simply in Homer himself?  No, contended one Lazarus Geiger, a German multi-linguist, who set about searching texts of past cultures, and found, amongst other things, a lack of reference to the colour blue – across, for instance, ancient Indian Vedic poems which yet contained many passages referring to the sky, and in the ancient Hebrew in which the Old Testament was written.   Geiger put forward the notion that our understanding of blue as a colour in its own right is a modern phenomenon.  "He showed that the words for blue in modern European languages derive from two sources; the minority from words that earlier meant green and the majority from words that earlier meant black.”

Were these ancient cultures, then, rubbing along in some kind of pre-blue world, hampered by their perception of colour?  Or were there just anomalies, the way we might, for example, protest that orange juice is always orange?

Take the Greeks’ word for green, chloros (from which we get chlorophyll).  If the word also encompassed the idea of freshness, of growth, of light, of something even anchored in movement, we might better understand its use to describe honey, or even a face filled with fear.

Colour seems fixed to a frame of reference, a context.  But, as Guy Deutscher would have it, how far can the eye see what words describe? And how far can words describe what the eye can see?  Does this ability differentiate societies and their languages?

Which brings me back to my periwinkle-blue make-up bag, a swift look at the lipstick, and a recollection that last time I was faced with the bewildering array of colour choice, it seemed crucial to opt for Rosewood instead of Red Carpet.

Thoroughly recommended!
Posted by Katie Griffiths at 14:03 No comments:

Email ThisBlogThis!Share to TwitterShare to FacebookShare to Pinterest
Labels: language

We fought hard for January,
past the graffitied hoardings
by the railway bridge,
through the paper-plate parties
and fuggy hangovers.
We held our nerve,
saw it advance upon the horizon,
its chink widening.

We allowed January
the dignity of no coloured lights,
left it unfussed,
a slow white month,
secretive and gestating.
And while shops relaxed
their tightfist of goods,
we plucked from January
the last silver squiggle of tinsel.

Posted by Katie Griffiths at 11:57 No comments: