The Naming of Names

This season used to be noteworthy for its harvest of names.

At the college where I worked as an English teacher, the most colourful haul of names habitually came from and the international students who redubbed themselves with a western alias to use during their stay in .  Certainly, it made life easier for those who could not get their tongues around the pronunciation of Xiaoqian or Guo Peng.  Some names evolved during the taxi ride from and were duly workaday.  Alan.  Kevin.  Susan.  Stephanie.  Others had a tinge of the exotic.  Gemini and Ice arrived as a matched pair at the college one morning, either side of their beaming agent.

Edison landed from , his name a fait accompli.  But three weeks into term his friend, Yu, stated that he, too, now wanted a western name.

He wished to be called Beethoven.

Yet how understandable this urge for reinvention.  I have always fancied the idea of changing and transforming, of shedding a skin.  And oh to walk the unknown paths of a foreign country - with clean slate, nothing to barter, and a soubriquet that would translate as On a wing and a prayer .

Posted by Katie Griffiths at 08:21 No comments:

Email ThisBlogThis!Share to TwitterShare to FacebookShare to Pinterest
Labels: language

A Woman in Goggles Mimics My Movements 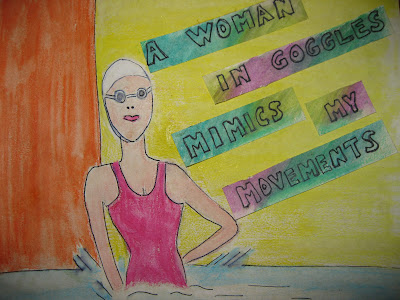 The title of this blog spot is taken from a poem I wrote after a visit to the local swimming pool where, in the shallow end, I did a bit of front crawl, water treading and (extremely average) breast stroke. A woman in thick goggles and swimming cap stared.

And I thought, how long have you got?  How long have I got?   I can’t just impart in five minutes something it’s taken me a lifetime to learn.

Yet I have come to realise two important things since I wrote that poem:

1.              I too am a woman in goggles – impatiently expecting others to use shortcuts to pour their knowledge into me, rather than facing up to the necessary commitment.

Mimicking the movement of others in the shallow end can be a useful starting point.  Getting to the deep end on your own is another matter.


This is the poem:

A Woman in Goggles Mimics My Movements

She’s at my heels, demanding that I do it again
only this time making it slower and more obvious,
as if my actions can be cornered and boxed
as a gift set that’s hers for the taking

And though the act of imitation may be small beer
in the drive to be someone else,
like battling into jeans tailored for other hips
or fantasising audiences by singing into a banana,

I would rather she did not plagiarise my steps,
gloss over the ten years to perfect a pirouette,
the sixteen to cartwheel out of danger,
the twenty-seven to handspring across the floodplains,

and I would rather that she, if hell-bent on copying,
were a smidgeon more frisky, a touch less bulb-eyed
than this frayed, itinerant soul – my doppelganger
come to repossess me, so long after nightfall.