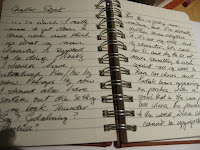 I’ve not been around much lately.

That’s because I’m writing my second novel.  It feels like a dose of the flu.  You know when you need to take yourself off to bed and allow things to run their course, getting up only when you need to go to the loo or trudge bleary-eyed and sore-headed down to the kitchen for a crust and a cup of tomato soup?

It’s just like that.  I swear this novel is the heaviest cold ever.  I want to treat it and only it, snuggle down into it, let it sweat itself out, let the aches and pains remain behind closed doors, confining it, nursing it, ignoring all phone calls asking if I have recovered yet.

Maybe this is exactly as it is meant to be.   Never surfacing until the indisposition has passed.  Refusing all temptation to rise from the sickbed and flee the house.  ‘I don’t go out for lunch,’ said A. S. Byatt simply, sternly last year when talking about the discipline of her writing life to students of Creative Writing at   I happened to be in that audience, cheering on one of my former star pupils, Haley Jenkins (watch this space →
← Haley, that’s for you).  As Haley’s guest, I accidentally found myself ushered into the ‘Green Room’ beforehand.  Suddenly, A.S. Byatt, that giant of modern English literature, was standing at my side.  Fortunately, no one had mistaken me for her agent, her sibling, or her distant North American cousin – unlike the time I was for ten minutes the wife of the late, and much missed, poet Michael Donaghy.

On that previous occasion, I had arrived extremely – and uncharacteristically – punctually at the school where he was due to give a reading.  As he went off to prepare for what turned out to be a scintillating and inspirational evening of poems recited from memory and flute playing, I hung around in the foyer - all too matrimonially, apparently.  I found myself being introduced to all manner of people by the Head of English.  Thinking this was extraordinarily attentive of the school’s staff to a person who had just blown in off the street, I lapped it up until the moment the head girl herself was summoned before me, and I heard the unmistakeable words: ‘and this is Mrs Donaghy’.

I was just… what?

Just holed up, to be honest, the novel brewing like fever, and still tetchy, grumpy, indisposed…
Posted by Katie Griffiths at 21:36 No comments: