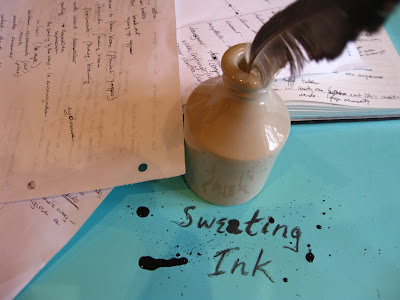 So, you’re trying to complete a difficult task.  You’re working your socks off, slogging your guts out.  In fact, you’re probably sweating blood as well.

It all sounds a little messy.

But if you’re Spanish, you wouldn’t be sweating blood at all, but ink. The Spanish language seems to have come to the conclusion that any job worth doing must involve a guttering candle, a quill, a full inkwell, and piles of vellum parchment on which to scribble, blot and smudge your tome. And so sudar tinta (to sweat ink) is the phrase you would use for such strenuous efforts.

I think I can vouch for this.  Recently I’ve been mopping my brow and armpits as I endeavour to translate into Spanish the poems from the collection I’ve been working on. I’ve pored over dictionaries, scratched lists of vocabulary, written and rewritten drafts.  (Why on earth are you doing this?  you may well ask.  Because it means I don’t have to think up any new poems.)

The perspiration comes from the need to nit-pick for accuracy.  And there lies the fascination of learning another language – its quirky expressions that don’t have direct equivalents in English.  I came across one yesterday at my Spanish lesson with the wonderful Ana María, when we were looking at an article about the Spanish writer Carlos Ruiz Zafón, who wrote The Shadow of the Wind.  Zafón, it would seem, divides his time between and the .

Except, as Spanish would have it, he lives on horseback between and .  (Zafón vive a caballo entre Los Angeles y Barcelona).

And you can just picture him: gripping the reins of his white stallion in one hand, a couple of copies of his new book The Prisoner of Heaven  in the other, galloping at full tilt for Zaragoza, for the Picos Europa, steering a course for the port of A Coruña where, incognito in a cape, he’ll stow away on a transatlantic clipper.  Down in steerage with his horse, he'll enjoy a reflective - if a little stormy - five-day crossing before disembarking  at .  Then he’ll speed ever westward, stopping only for sunrise over the Grand Canyon, and on towards .  As soon as he arrives in LA, there’ll be just enough time for a booksigning, a hurried interview, and a rub-down of the steed before saddling up and cantering off to once more.

I admire and applaud Zafón's horsemanship.  Not to mention all the ink he sweats into his books.
Posted by Katie Griffiths at 15:36 No comments:


Diksmuide in Belgium (pictured above) is a town that has been overwritten by the stories of many different people.  But for me it bears the imprint of my father.

I was lucky to have visited Diksmuide with him in the 1990s when he showed where he and other Royal Engineers had been stationed for a brief moment in the Second World War.  By blowing up roads and bridges, the sappers were part of a concerted attempt to slow the German advance north in May 1940.  Germany had launched an offensive on the Netherlands, Belgium and Luxembourg.  When it became clear that thousands of allied troops risked being trapped, a daring evacuation plan was implemented.  Operation Dynamo became famous as the episode when soldiers were rescued by all manner of boat from the beaches of Dunkirk.


Diksmuide, some 35 kilometres from Dunkirk, was for my father a memorable staging post on his route towards the coast and safety.  As I stood with him not far from the arch you can see in the photograph at the top of this page, he pointed out where he had faced the enemy just across the IJzer River, and where the bridge had been blown up.  Just up the road, he found again the farm where he had taken shelter and from where he was the last man of his platoon to flee, losing precious minutes on a dodgy motorbike that would not start.

But the patch of ground familiar to my father also happens to be the site of a monument of significance to Flemish people.  A large tower with the initials AVV-VVK or Alles Voor Vlaanderen-Vlaanderen voor Kristus  (All for Flanders - Flanders for Christ) and visible for miles across the flat Belgian countryside was erected on the spot of an earlier war memorial that was largely destroyed in 1946.  It now contains a fascinating museum.


When I visited Diksmuide again recently while on a daytrip to Dunkirk, I was made aware how keenly the Flemish community has struggled for Dutch language and culture rights.  The issues have simmered for years, the young man at the reception desk in the museum said.  They started at the official birth of the kingdom of Belgium in 1831, when the decision was taken that French would be the main language.  They were perpetuated through divisions that saw the majority of the bourgeoisie speaking French, and officers in the Belgian army speaking only French so that Flemish soldiers did not always understand their orders.  They carried on through continued resistance to Dutch being taught in schools.  "If I go to the French speaking part of my country, I am able to address people in French," he said.  "But if they come here, they cannot speak to me in Dutch.”  And certainly, in the museum the impetus towards Flemish recognition and emancipation was apparent through the narratives and exhibits displaying glories and injustices - how, for example, the Flemish had to fight for the right to have the names on graves of fallen soldiers inscribed in Dutch rather than French.

But another surprise waited on the top floor of the tower.  Here,  a painted 360◦ panorama (left) shows Diksmuide as it was at the time of the First World War.  For this area is part of Flanders which saw some of the Great War's heaviest fighting.  What may look like railway lines in the painting on the left are actually lines of trenches, some running along the side of the river, which formed the front line in the Battle of the Yser (IJzer in Dutch).  In October 1914 the Belgians opened canal gates in order to flood the area all round the river.  It was a desperate measure to defend territory, but the town of Diksmuide fell to the Germans in the November. 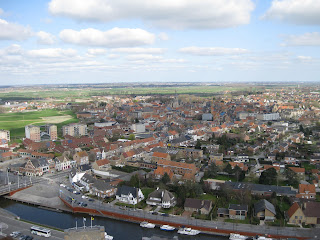 I looked out across from the topmost point of the tower over the Diksmuide of 2012 and towards the flat land beyond.  It was a glorious sunny Sunday.  And I thought about soldiers nearly one hundred years ago in appalling conditions for long months in trenches.  I thought about nearby Dunkirk and the smoke, rubble and chaos a generation later in a different war when men waited for help on the sandy beach.  I thought about the relief of the 340,000 allied troops who were rescued, the sacrifice of the more than 4,000 who were not, and the luck of my father who had eventually got the motorbike started and, though wounded in the leg, managed to limp aboard a Royal Navy vessel rather than being left behind to become one of 40,000 prisoners.


Across this patch of land, as in so many parts of Europe, it was clear that history lay in deep layers.  Even now Belgium creaks and strains under the aspirations of its Flemish and Walloon communities.  And the words spoken only an hour before by the museum's receptionist reverberated in my mind: "We are not ETA or the IRA,” he had said.  “We are doing things step by step, politically and correctly."


This swathe of territory - disputed, seized, liberated -  still asks for constant vigilance in order to maintain its peace. 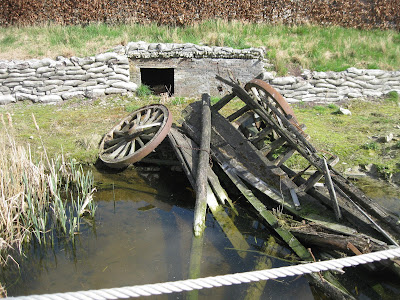 Nooit meer Oorlog - Never again war .  These words are written on the IJzer Tower in Dutch, French, English and German.  These were the languages of the forces involved in the area during WW1.

Posted by Katie Griffiths at 16:07 No comments: