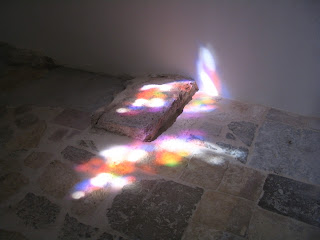 When my great-grandmother
discovered she was the last speaker
of the mid-west dialect,
she ditched her songs
of wind and tumbleweed
to mime for me
ten words for sorrow.

Her garments were eased
to show a sorrow that salted
deep folds in her skin.
That rose and hooked
the back of her throat.
That contoured
into an hourglass,

squeezing the very rasp
out of her. And how
the same word, with new
inflection, connoted a type
that flowed swiftly,
and formed a gully
she could not wade.

She taught me
the word for sorrow
that out-shrieks darkness.
That descends like gauze,
yet no beast can rip through.
A kind that fastens itself
to the span of just one day

or to a jutting peg
where cast-off jackets droop.
And when her hands measured
empty space, I saw it made
a difference whether sorrow
remained solely the vehicle,
or became the entire road. 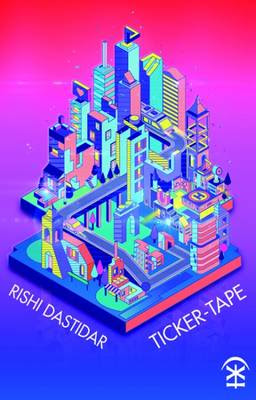 …although the link between jousting and Rishi Dastidar’s Ticker-tape seems at first to be a stretch, it is there, in the whole notion of a book launch where you hurl a book, throw it high in the air, its arc curving under the nostrils of a hungry public.  The action is no less than a spear thrust, which is the origin of the word launch, coming as it does from Middle English launche, and Anglo-French lancher, and Late Latin lanceāre meaning to wield a lance.  To be liberated with your lance, be a free lance, or a sprightly lance, or a totally crowd-clearing lance depends entirely on how you want to work these days - whether you take your lance with you on the Tube, or into the 5 pm gridlock, or over the soggy moors at night.  And if you lance frequently, lance a lot, in fact, then you are turning into something knightly, courtly, a bit cavalier perhaps, which etymologically speaking means you must be travelling with a horse.  And then we have to get into cavalcades, parades of horses, even a ticker-tape parade where (if you are lucky) paper, words, and poems rain down on your head.

All of which means I’m hugely looking forward to this evening’s launch of Ticker-tape in Waterstones, Piccadilly, London.
Posted by Katie Griffiths at 12:38 No comments: 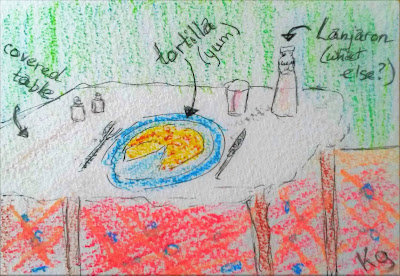 This time of year my thoughts always turn to Spain.  From a notebook dated 2010:

At the bus station café in Malaga, the waiter is running a tight ship, persuading and cajoling all ditherers at the door to sit down at a table even before they have time to get their bearings.  This way there is no dilly-dallying at the counter over the cheaper fare, but an orchestrated segue into the more serious part of the establishment.

Middle-aged with a small paunch, the waiter busies himself constantly - wiping tables, taking orders, clearing crockery, and directing with aplomb the not-so-sure hovering at the entrance.  He stretches a friendly but authoritative hand to my shoulder, and I am clinched.

After taking my order for tortilla, he flourishes a paper tablecloth to cover the perfectly serviceable, perfectly wipeable melamine table to indicate that here, unlike those feebly ordering only a cup of coffee, is a customer who has squared up to the menu and is ready to dine.  I sit prepared for his next move, perhaps to tie a napkin around my neck.

‘¿Cómo se llama en español?’ I ask, motioning to the tablecloth.  I’ve forgotten what it’s called, but offer up the word napa, a ridiculous cheatling I’ve concocted from the French nappe.

He nods, slowly, sympathetically, in recognition of the misfortune it must be to hail from a land in which the art of covering café tables with paper tablecloths has all but disappeared.
Posted by Katie Griffiths at 14:21 No comments:

Just in under the wire, before the month changes - a poem about January.

Posted by Katie Griffiths at 09:20 No comments:

Email ThisBlogThis!Share to TwitterShare to FacebookShare to Pinterest
Labels: poetics

I've long enjoyed Peter Raynard's blog Proletarian Poetry, 'a home for poets and poems that portray working class lives from many different angles', and am very honoured that my poem A Lack of Minarets has found a place amongst excellent company.

The poem was first published in Primers Volume One  by Nine Arches Press.
Posted by Katie Griffiths at 15:06 No comments: 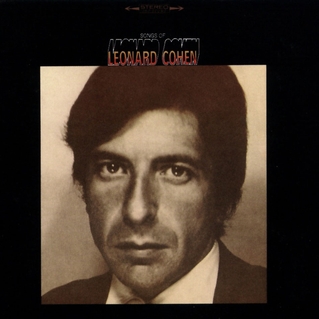 (In memoriam: an article first published on 20th March 2013 on the Mslexia guest blog.)

With this statement, I was introduced to the work of Leonard Cohen. His praises were being sung in Woodroffe High School, Ottawa, by my English teacher – an inspirational individual who was inclined to deliver a class from inside the closed store cupboard, or encourage us to graffiti over the blackboard and then award a prize for the most biting witticism, or write in huge lettering across an exam answer: GADZOOKS GIRL!!! READ THE QUESTION.

For such a person, how would we not sit up and listen?

We had the word-sheet and we sang along. And yes, we were prepared to concede: Leonard Cohen’s So Long Marianne was a fine song.

Although I didn’t take at the time to Cohen’s rather scratchy thin voice – nor appreciate that the bouzuki sound towards the end of the song was a neat allusion to the Greek island of Hydra where Cohen lived with the eponymous Marianne – a couple of verses from that song began to imprint themselves and have never left me:

Now as I contemplate the prospect of writing my own lyrics, it occurs to me there is much to learn from Leonard Cohen, who at the age of 78 is still out on the road, performing his latest album Old Ideas. It is not so much his personal longevity that interests me, admirable though that is, but the endurance of his songs.

Perhaps Cohen’s lyrics were always destined for a superior kind of polish given that he was first and foremost a printed-page poet.  A number of collections that won praise in Canada before be became a singer and a name on the world stage – Let us Compare Mythologies (1956) The Spice-Box of Earth (1961) and Flowers for Hitler (1963) – established his craft before ever Marianne, as it is rumoured, handed him a guitar on which to compose tunes as well.

It is his poet’s attention to detail, to syllabics and rhyme, that have, I feel, given his songs their legs. But though one might think this set of skills would make for an easy transition to songwriter, Cohen has spoken about the sheer slog of finding the right words to link with melody. He is famed for drafting and redrafting, for notebooks stuffed with ideas, for songs that have taken years to write.  But even after all that, he is aware that there is still something indefinable in the songwriter’s task. As he says in Songwriters on Songwriting:

Well, things come so damn slow. Things come and they come and it’s a tollgate, and they’re particularly asking for something that you can’t manage.

One of Cohen’s most extraordinary successes is Hallelujah, a song that has been recorded some 370 times by artists of larger and smaller note, used as soundtrack in films and TV series such as Shrek and The West Wing, and requested at funerals and  weddings. The song, alluding to the Biblical story of David, to sexual temptation, to the sacred and the secular, and to questions of faith, had a difficult gestation of three years and seventy verses. “I remember being on the floor, on the carpet in my underwear, banging my head on the floor and saying, ‘I can’t finish this song’” Cohen said, quoted in a  BBC article on Ian Light’s recently published book about the story of Hallelujah.

When Cohen finally came to the recording studio, the song had been honed to four verses. But compared to later versions, Cohen's original is a surprise – a rather cheesy number, with staccato endings in the chorus and a swing feel.  Columbia Records had such commercial reservations about it and the entire album Various Positions, that the decision was made to release first in Europe, in 1984, before a launch in the US the year later.

Nonetheless, Cohen, whose career had hit a slight doldrums, was still doing live appearances and Hallelujah, aired at times with substitute verses, met favour with audiences.  Even Bob Dylan, arguably the most famous of the 60s generation wordsmith singers, performed it in 1988.  But then the song underwent two important regenerations – first by John Cale (originally from Velvet Underground) who used a simplified piano arrangement and a different set of Cohen’s verses, and then, in 1994, by Jeff Buckley, who stood before a microphone with spell-binding vocal inflections and an echoing guitar.  His tragic death by drowning two years later at the age of thirty made a threnody and cult classic out of this haunting – and many would argue definitive – version.

Both Cale and Buckley sang the same first two verses as Leonard Cohen did in his original recording, but added a different final three, rooted in relationship and  physicality, and with a bleaker end line: It’s a cold and broken Hallelujah rather than Cohen’s more defiant: With nothing on my tongue but Hallelujah.

Other artists have endeavoured to put their own stamp on the song – from K.D. Lang’s acclaimed performance, through Bon Jovi, Rufus Wainwright and Alexandra Burke, winning contestant on the UK’s X Factor in 2008 who, despite the de rigueur schmaltzy key change for the final verse, gave a creditable interpretation, and all the way to a highly idiosyncratic recording by Bono.

Even the  ukelele-playing Jake Shimabukuro has finessed an instrumental version, drawn he claims, to the tune. But it is my assertion that he would not have been captivated by this song had it not been for the musicality mined in it by Jeff Buckley via Jim Cale. And those versions may never have existed were it not for a compelling set of lyrics that invited reinterpretation. I think Shimabukuro would not have heard the song in the way that he did but for those who passed it on. It’s like the end of a Chinese Whispers round.

Yet this song, to me, was cemented through its lyrics.

So, what can a would-be lyricist learn from Leonard Cohen?
About this last point, I am reminded of “the eye” referred to by the poet Alice Oswald on a recent Radio 4 programme, The Echo Chamber presented by Paul Farley. “There’s something mysterious about what animates a poem,” she says. “I always try to create an eye in a poem … which I see as a kind of pinhole through which light can pass….It’s a kind of exit point in the poem that stops it from being a solipsism….But when I see that it has a pinprick hole in it through which something different can enter then I’ll be satisfied. Even if it’s an imperfect poem, at least it’s got a kind of consciousness of its own.”

I think that Leonard Cohen’s lines in songs such as So Long Marianne and Hallelujah have such an eye – giving them a “kind of consciousness” that inspires other performers to sing the words again and again. There could be no better accolade for a lyrics writer.

Posted by Katie Griffiths at 11:26 No comments: 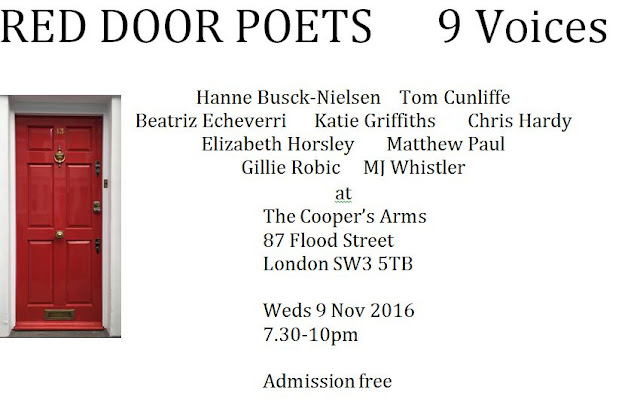 Posted by Katie Griffiths at 18:00 No comments: